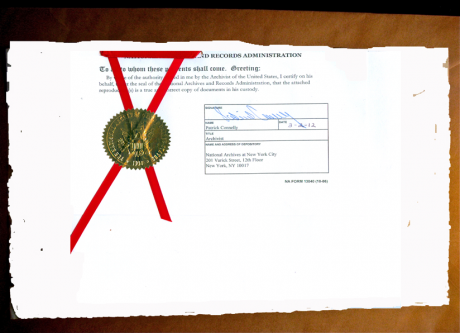 Stumped Student has a document, two citation guides, a class project, and a common question: How do we cite a record when we don’t have all the details the guidebooks say to cite?

Her document is a fragment of a ship passenger list, supplied and certified by helpful archivists at the U.S. National Archives–New York City. The certification is impressive. It is attached with a red ribbon, stamped with a gold seal, and prepared under “the authority vested ... by the Archivist of the United States.” Each photocopy is officially embossed. Source identification is added onto the last sheet (imaged above):

“Reproduced from the original record at the National Archives at New York City on March 2, 2012.

Being no stranger to source citation, Nancy’s immediate reaction was something akin to Hmhh. This doesn’t look like anything I’ve been told to do!

Nancy’s dilemma is a fairly common one with documents received from many public and private archives. Style guides dictate the inclusion of certain details, and they have good reasons for doing so. The kicker is that those details often do not appear on the record copies that researchers receive.

A Reality Check & a Useful Lesson

There are two cold, hard facts in the research world that make us mutter, Oh, bummer!

It is also naive to expect that the record identification supplied by the archives will meet our preferred style and standards. What archivists more often supply is the bare minimum needed by them to relocate one of their own records. Consequently, citation guides created by many archives need to carry a disclaimer on their covers: Do as we say, not as we do!

Dealing with with Realities 1 and 2 is well worth the effort. Nancy’s document proves that point, as you will see below.  Analyzing her dilemma also provides a valuable lesson for anyone who uses materials from the U.S. National Archives, affectionately known as NARA.

A Crash Course for Users of NARA Records

One of the many helpful research aids prepared by NARA is the pamphlet known to generations of users as GIL 17: Citing Records in the National Archives of the United States.1 It has just 12 slim pages and is easily digested. It also forms the core of Evidence Explained’s far more detailed 106-page Chapter 11: National Government Records. 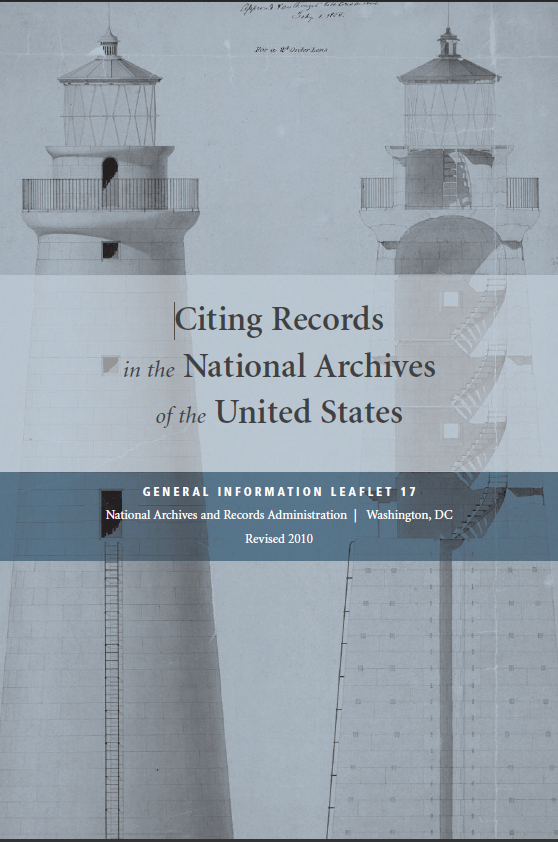 GIL 17 provides a basic model for citing all NARA manuscripts (textual records), regardless of the type of record. Like most NARA citations, it’s wordy:

GIL 17 also tells us that this model includes six elements, each of which is separated by a semicolon for clarity:

File unit (“folder, jacket, or bound volume that holds a record” or, “for microform records, ... the roll or fiche number”)

Series (“a set of record items .. kept together because they ... have some ... relationship”)

Subgroup (“a set of series, related by their common origin”)

Record group (“a major archival unit that comprises the records of a ... bureau or independent agency”)

General Records of the Department of Justice, Record Group 60;

Repository (“the building or institution in which the records are held”)

In Nancy’s case, we can easily identify the repository, the NARA branch that supplied the passenger roll. The “citation” typed on the document explicitly states a series, as well as a record group name and number. That accounts for three of the six “standard” elements.

However, the “leftover data” does not seem to fit any of the three holes into which we might plug it. In fact, GIL 17’s descriptions of its six standard elements do not even mention a box number or an entry—whatever the bejibbers an “entry” is supposed to be.

Most major archives, bless them, prepare finding aids to guide their users. Most provide inventories, many of which are now conveniently posted online. NARA has created hundreds of them. Those guides carry all sorts of labels: inventories, preliminary inventories, special lists, descriptive pamphlets, &c &c &c. They also carry a bunch of arcane acronyms used as insiders’ shorthand: INVs, PIs, SLs, NCs, DPs, and more. Few of these finding aids offer indexes. But they’re a fantastic portal to far more records than most researchers ever imagine.

If you, like Nancy, have a document with a cited record group but little else, your starting point is conveniently online. NARA’s classic Guide to Federal Records in the National Archives of the United States covers three oversized volumes in its print edition, with a chapter devoted to each of 514 record groups.2 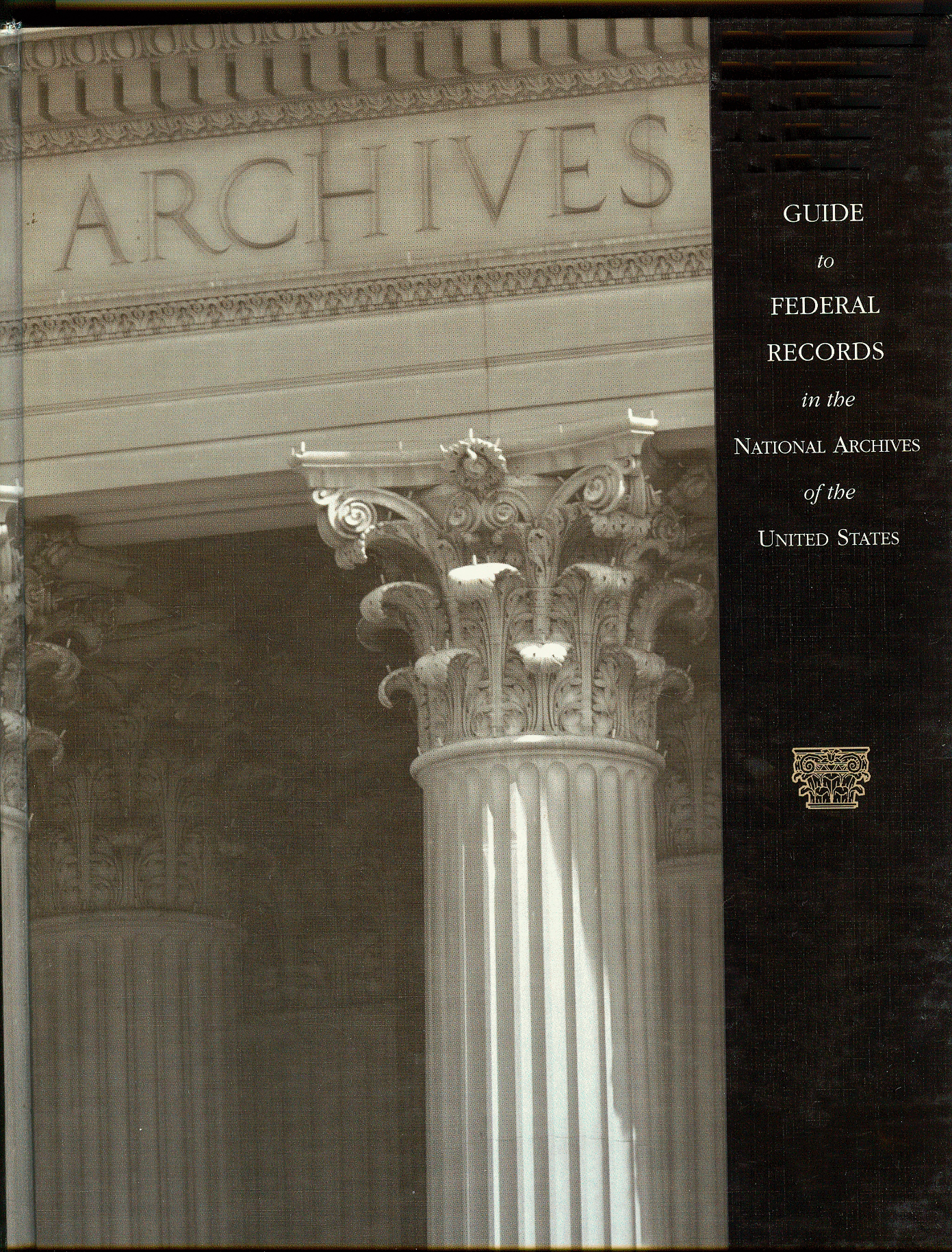 The web edition follows the same arrangement. Each chapter is short. It also serves up a dense stew of details. Nancy’s case serves as a simple strategy for digesting that stew:

In this case, the chapter for RG 36 identifies its principal finding aid in somewhat abbreviated form:

While we’re deep into the online guide, if we plow our way through all six pages of the chapter on RG 36, we’ll notice something else. The “citation” typed on Nancy’s document identifies RG 36 as “Records of the U.S. Customs Service–New York Office.” However, RG 36 covers the Customs Service nationwide—dozens of offices—not just the one attached to the port at New York City.

Cutting loose that location data from the RG’s name means we have another leftover tidbit to fit somewhere into our unfilled holes. Where do we plug it? We’ll find our answer in Holdcamper’s PI.

Many NARA researchers limit themselves to three types of records: (1) what’s on microfilm, (2) what’s been digitized online, usually images from microfilm, and (3) a small number of record types that can be ordered via canned forms at the NARA website. Newsflash! Most of what NARA holds has never been filmed or digitized. Until the glorious day comes that all are online, the inventories are the go-to place where we discover millions of records we never knew to wish for.

This set of finding aids is accessible in several ways:

Holdcamper’s inventory provides the explanation we need for the puzzling “Entry 914” cited on Nancy’s document. The term was not used in GIL 17 because it’s not part of NARA’s organization scheme for textual records. (You remember that scheme, right?  Record unit < File < Subgroup < Series < Record group < Repository.)

Almost always, when we see that word entry connected to NARA records, it refers to a descriptive paragraph within an inventory. What’s more, every RG’s inventory reuses the same basic set of numbers.The place to cite that entry number is in citations to an inventory itself. For example, a citation to Entry 914 in this Holdcamper guide looks like this:

Arranged chronologically and thereunder by name of vessel. These lists have been microfilmed. See entry 917 for index.

The label for each “entry” in an inventory—those capitalizated words—is typically the series name. That’s what we put in the series field when citing a NARA manuscript. We’ve already encountered this one (“Passenger Lists, 1820–95”) in the “citation” provided by NA–New York City.

Entry 914 also tells us that the series is a humongous one: 1,057 linear feet. It tells us the time frame covered by these rolls. It does not tell us the port or ports covered in this series, but that detail is easy to find. Doing so rewards us in three ways:

The table of contents to a National Archives PI works like a drill-down menu at a website, as you can see from the red flags added to the attached page samples:

Pages 7–8 and 99 all “educate” us about the record set we are using. They also introduce many “entries” that clue us in to other records.  In fact, a roam through those entries can trigger all sorts of epiphanies:

Meanwhile, back to Nancy’s citation ...

The drill-down menu we just found in Holdcamper’s Table of Contents has supplied the rest of the details we need to solve our citation problem.

As you’ll recall, the data given by NA–NYC left us in this predicament:

The needed record item is a piece of the record I.D. that we create ourselves by eyeballing whatever we are using. In Nancy’s case, the record image shows a title: “List or Manifest of all the passengers taken on Board the Steamer, City of London.” The document obviously needs a date, since the series description at Entry 914 tells us that ship rolls are arranged chronologically. The photocopied manifest page itself carries no date, but NA-NYC also photocopied an attached sheet that cites “July 1 [18]66.”

The missing file unit is a bit more vexing. GIL17 identifies that element as a “folder, jacket, or bound volume.” Problem is: that description doesn’t fit this collection of ship rolls. Might this be where we put “Box 501I” as cited on our photocopy? As a rule, no. Amid physical moves, preservation efforts, and other archival toils, box numbers can change. GIL 17, however, offers an escape hatch for this new dilemma (p. 4): “Not all citations have all of the elements.” Okay, thank you, Gil. We can just leave this one blank.

Obviously in this case, the subgroup data falls between the record group and the series. With this gap filled, we at last have a citation:

In the course of all this record analysis, we’ve skirted two other items that could, or might, or maybe should be considered:

The most-basic rule for citing anything is We cite what we use. In this case, Nancy did not actually use the microfilm. If she had, the focus of her citation would have been upon the film. She would have named the microfilm publication and its NARA publication number, the specific roll number, the frame number, and other relevant detail about the film. She would also have a lot more information about fellow passengers than what this certified fragment gives her.

What Nancy does have, right now, is a photocopy of a ship roll—one said to be made from unidentified frames of an unidentified film. The header on each page of the roll identifies the name of the ship, but not the date of arrival. It is attached to another loose sheet that names the ship and supplies a date. She also has the certification of an archivist that the pages were truly made from a specific series in a certain NARA record group. But the remaining details needed to comply with NARA’s own citation manual don’t appear in the certification.

All things considered, Nancy’s best citation is a simple one that focuses on what she actually has at hand and merely quotes the citation provided by the archivist:

So, if this is all she had to do, why have we led you on this expedition through such esoteric things as NARA’s GIL 17, its online Guide, and its thicket of inventories?  Because knowing that these finding aids exist—and knowing how to find and use them—will open up a kazillion possibilities for you and your research in the years ahead.  Enjoy!

3. For example, one of the most important inventories for U.S. military researchers, Lucille H. Pendell and Elizabeth Bethel’s Preliminary Inventory of the Records of the Adjutant General’s Office, PI 17 (Washington: General Services Administration, 1949), has been imaged by HathiTrust. The essential guide for Native American research, Edward E. Hill’s Preliminary Inventory of the Records of the Bureau of Indian Affairs, PI 163, 2 vols. (Washington: National Archives and Records Service, 1965), is also digitized by HathiTrust.

4. Holdcamper’s inventory, discussed above, is a good example. For the reprinted and enhanced version, see Forrest R. Holdcamper, Preliminary Inventory of the Records of the Bureau of Customs (Record Group 36), with index by Eileen Chamberlin and Julie Kidd, NC 154 (1968; reprint, Portland: Oregon Territorial Press, 2001).

5. The most popular of NARA’s preliminary inventories are cataloged and offered online at Heritage Books, Inc. (www.heritagebooks.com); others can be special ordered from this site.

How do we cite a archived record when we don't have all the details the guidebooks tell us to cite?