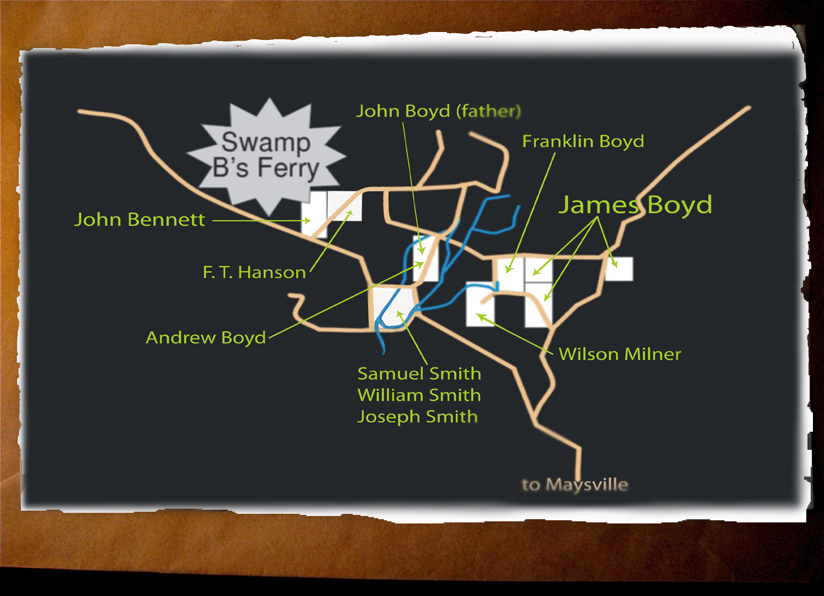 Biographical research on people from the past is a gamble. Our person of interest may or may not have been literate. Even the schooled may have left few traces of their existence. Many documents we expect to find for the place and time will have suffered destruction. The answers we seek to specific research questions may not appear in any surviving record created by our person.1

All these trials explain why many successful researchers live by the FAN Principle: When those we study left no document to handily supply the information we seek, we often find it in the records created by members of their FAN Club—their Friends, Associates, and Neighbors.

Identifying someone of common name, distinguishing them from other same-name people, is always a challenge. Identifying a female of common name, from an era in which women lived domestic lives sheltered from the public eye, can seem impossible. It’s not—not if we apply that FAN Principle.

In 1850, there were at least 17,995 females in the U.S. named Mary Smith.2 One of them appears on a marriage record, three years later, in the rural county of Leake, in the hills of Mississippi. She married a young widower named James Boyd, another common name under which three marriage licenses were issued that same year in that one rural county. One of those is the springboard for this lesson.3 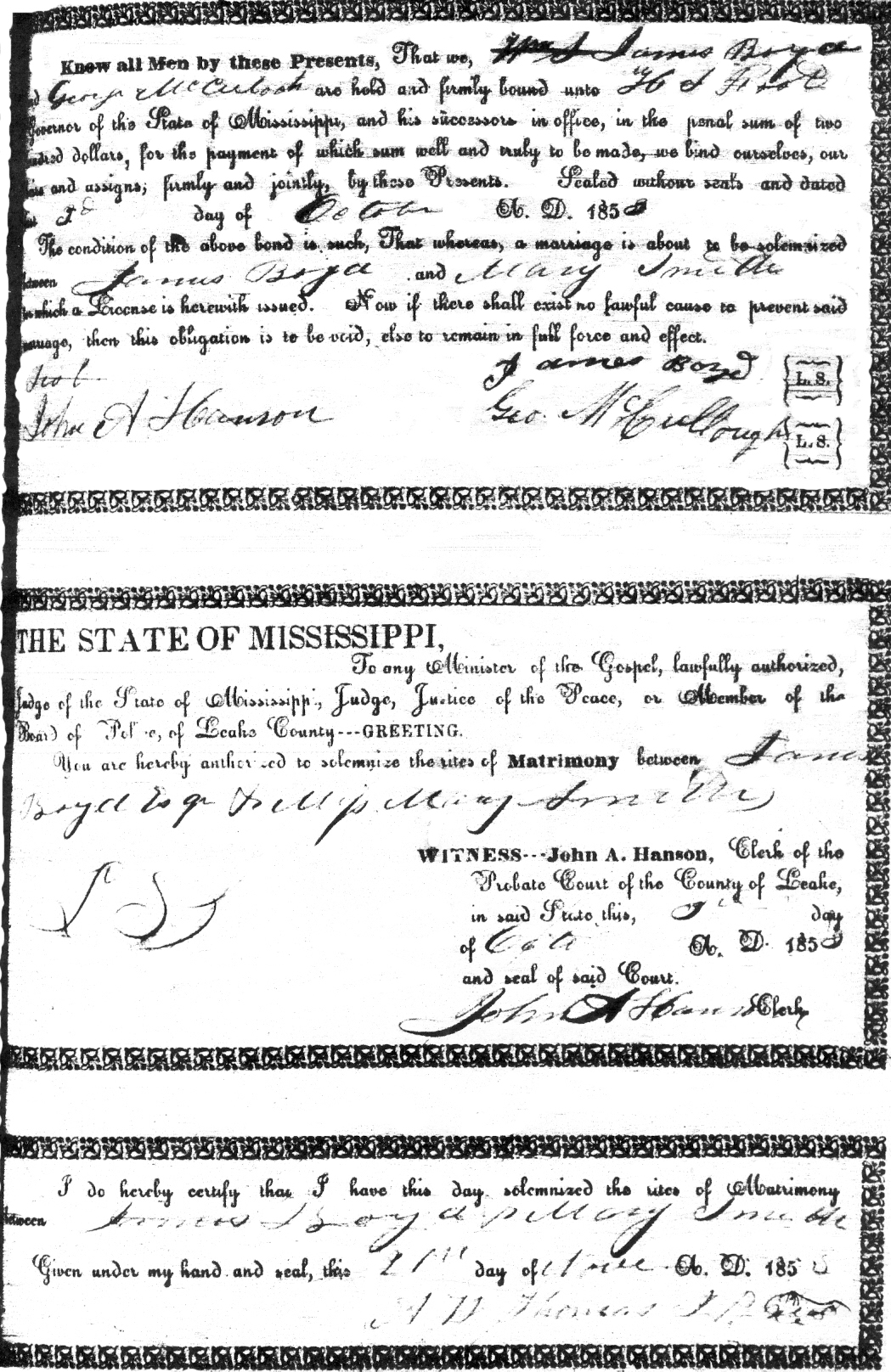 The license, bond, and return for Mary and James tell us nothing about James’s new wife, aside from the name Mary Smith. We are given no age, no parental identities. Typically, useful clues lie in the identity of the men who cosigned the marriage bond and officiated at the ceremony. In this case, the bondsman was James’s cousin, George McCullough. The official was a justice of the peace named A. W. Thomas.

So, who was this Mary Smith? At this point, only one certainty existed: She belonged to James Boyd’s FAN Club. She and her family should be findable among his friends, associates, and neighbors.

Social and economic context also help us narrow the field of potential candidates. Leake was a rural county and Mary’s new husband was a farmer—which suggests he did not go far to go courting. Yeoman farmers began their days before sunup and worked until dark. They took no vacations, or even weekends off. When rain left fields too muddy to work, the cows still had to be milked at dawn and dusk. Chickens had to be fed. Hogs had to be slopped. And this particular farmer, in search of a wife, was also a new widower with five children—the youngest a babe in arms.4

All things considered, the Mary Smith who married James Boyd likely lived within two to three miles of him—five at the most. Five country miles in a modern pickup truck is a five-minute sprint. In any search for Smiths in the 1850s, it would have been a big territory to cover: a five-mile radius encircling James would encompass some eighty-eight square miles.

Designing a research strategy calls for identifying all known resources and correlating them against the work previously done.5 The census taken of Leake County three years earlier provided at least seven candidates for Mary. Others arrived after that. Prior researchers had followed the paper trails left by all contemporary Smiths in Leake County. They found no wills, probates, deeds, court cases, church registers, newspapers, or other local records to identify the family to which she belonged.

One resource remained unexamined, a kind of courthouse record that exists widely across nineteenth-century America. The agency that created it carried different names in different places: commissioners court, board of supervisors, police court, police jury, or whatever name was used by the local board that handled administrative matters such as poorhouses, licenses and tariffs, elections, and road maintenance. The minutes kept by those bodies are also a historical resource frequently neglected by researchers because the original clerks rarely indexed them.

Aside from poorhouse matters, the activities chronicled in this record set were activities that rarely involved females. Nonetheless, these minutes could be critical to determining Mary Smith’s identity, because of the premise that governed this research project: Clues to the identity of a female will come from the FAN Club of the man she married. Theoretically, the activities uncovered for James Boyd—once we read those minutes year by year, page by page, and line by line—would point to Mary’s identity. They did not disappoint us.

Four months after Mary married James, the Leake County Police Court held its spring meeting and issued a rash of road orders, including this one:

Here, we have a neighborhood. Road orders of that era typically assigned men to work the roads on which they lived, usually a two-to-three-mile stretch. Not all men who lived along a road were expected to do road duty. Men past poll-tax age, roughly in their fifties or older, were rarely assigned that physical labor; instead, their community service was likely to be jury duty, poll watching, and the inventorying of estates. Crew assignments also rotated. One year, the work would fall to menfolk from one set of families; the next year, the responsibilities would shift to others.

The takeaway from this court order is clear: Four months after James Boyd married Mary Smith, he and his known brothers Franklin and Andrew shared a two-to-three-mile stretch of road with three young men named Smith.

Curious, but perhaps coincidental, is the arrangement of the names in the road order. Clerk John A. Hanson placed the three Smiths into the midst of the Boyd family. Indeed, immediately after citing Franklin Boyd and then his next-youngest brother James, the clerk switched to the Smiths, before returning to the youngest Boyd brother, Andrew. Was Hanson (himself a member of F.T. Hanson's FAN Club) following the actual arrangement of houses along that road? Or did his arrangement of names reflect his mental associations, amid which he jumped from James Boyd—the new husband of Mary Smith—to the Smith males, before realizing that he had not cited the youngest Boyd?

As always, theories need to be tested.

Each new “find” we make calls for a reevaluation of resources and strategies. In this case, the identification of James’s FAN Club dictates research on each member of that road crew.

Research in the local deeds and the federal land records for the county identified their landholdings. By platting the lands, we could create a visual of the neighborhood, with the relative position of each man and his family 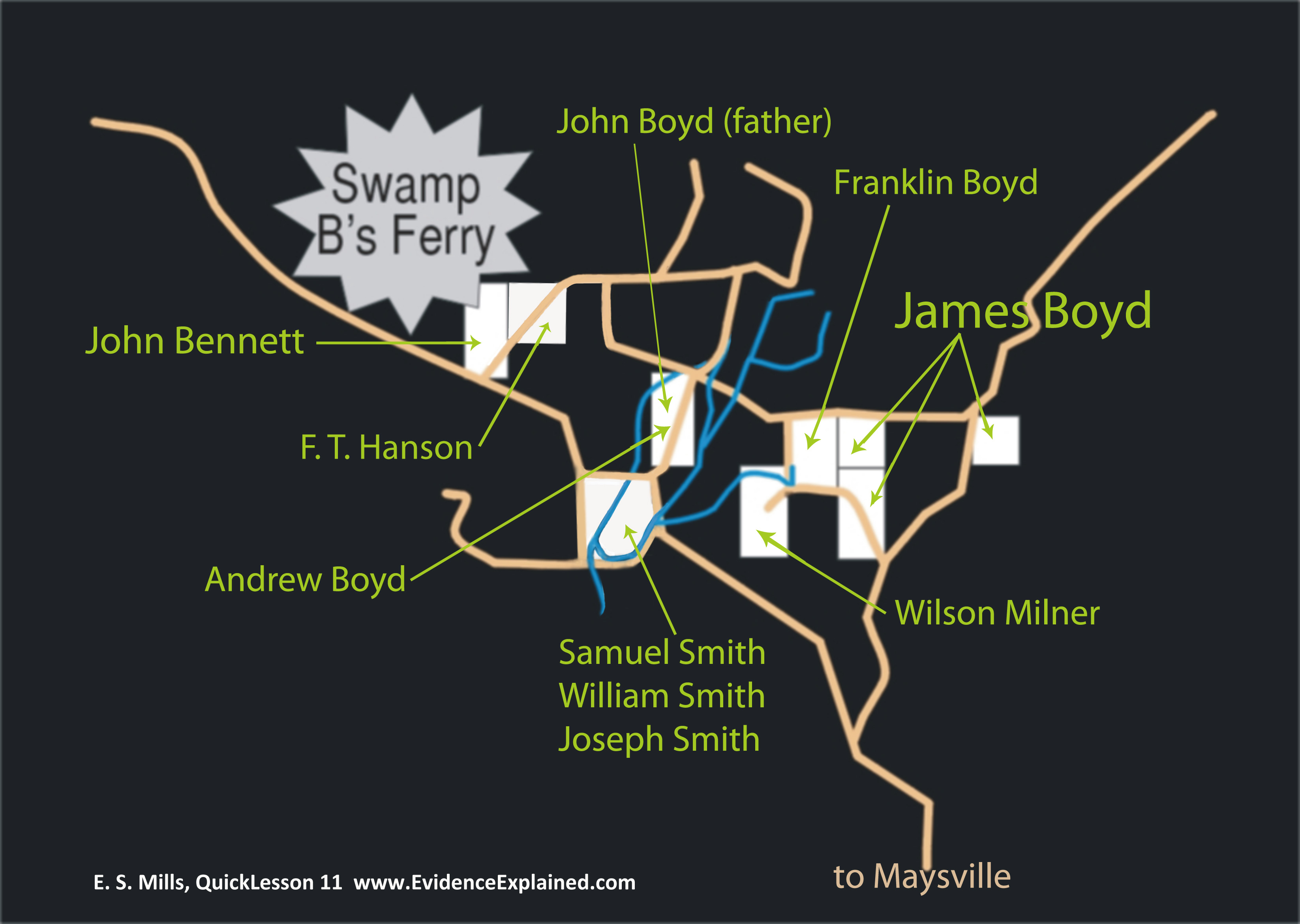 Moving clockwise from about ten o’clock on this neighborhood sketch (click to enlarge), we find:

The location of the land of this William Smith, within a mile of James Boyd, suggests a likely birth family for Mary. The question then became: Did this Smith family have a daughter Mary of marriageable age in 1854? The 1850 census of that Bennett’s Ferry neighborhood confirms our hypothesis: 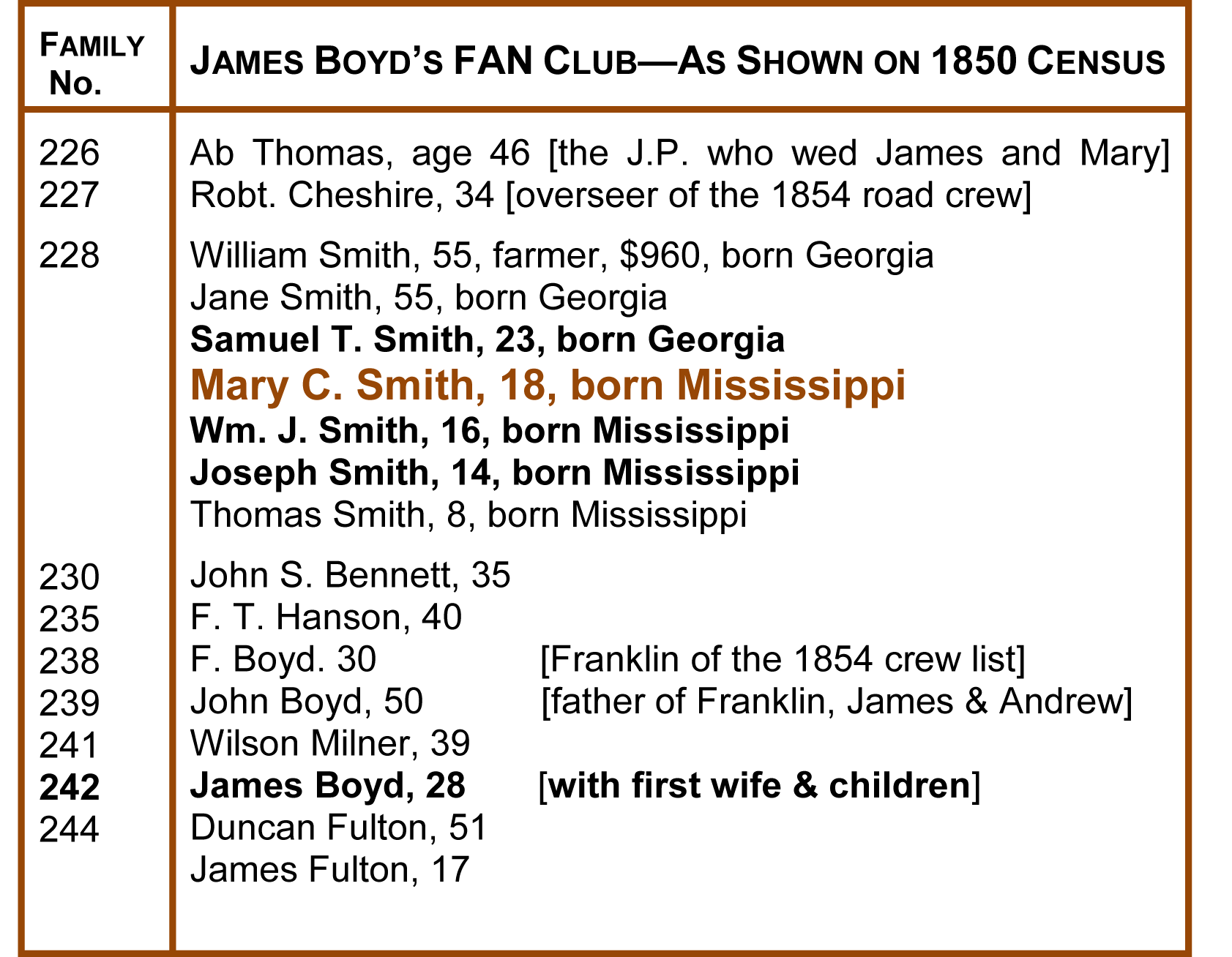 Here, in family 228, we have not only an unmarried Mary of marriagable age, but the whole cluster of Smiths from the 1854 road crew, itemized in the same sequence (oldest to youngest) in which they were listed on the road order.15 Two doors from this family, at 226, we find Ab Thomas, the justice of the peace who officiated at Mary’s marriage to James—the same Absalom W. Thomas from whom William Smith, Wilson Milner, and later Andrew Boyd all bought the land on which they built their farms.

James Boyd’s FAN Club, as we expected, were Mary Smith’s “friends, associates, and neighbors” as well. It would be nice, after all of this, to think that James and Mary lived happily ever after. They didn’t, but that story involves another knot of problems to untangle in a later lesson.

The evidences we use to reconstruct human lives—all too frequently—are not outright statements of “fact.” For want of those ideal documents, handily left to us by diligent scribes, successful researchers learn to harvest clues. Bits and shards of evidence that prove nothing by themselves can be immensely valuable as pointers to other records or as fragments we can assemble to build a case for whatever question we seek to answer.

2. “1850 United States Federal Census,” database, Ancestry.com (http://www.ancestry.com: 25 August 2012), query for “Mary Smith.” There were undoubtedly many others enumerated on returns where the census marshal used only initials.

4. The 1850 census (among other records) identifies the oldest four children of James Boyd and his first wife Elmira. His last child, Martha Elmira Boyd, was born 10 August 1853, amid a yellow fever epidemic that took the life of James’s mother Mary (Warren) Boyd and then, apparently, James’s wife. Both James and his father John remarried in November 1853.

13. Andrew appears not to have left the parental home until early 1856, when he bought 40 acres from Absalom Thomas, the J.P. who officiated at the Boyd-Smith marriages; see Leake Co. Deed Book M, p. 66.

How to Cite This Lesson

Biographical research on people from the past is a gamble. Our person of interest may or may not have been literate. Even the schooled may have left few traces of their existence. Many documents we expect to find for the place and time will have suffered destruction. The answers we seek to specific research questions may not appear in any surviving record created by our person.