Analyzing Census Anomalies—and Why We Should 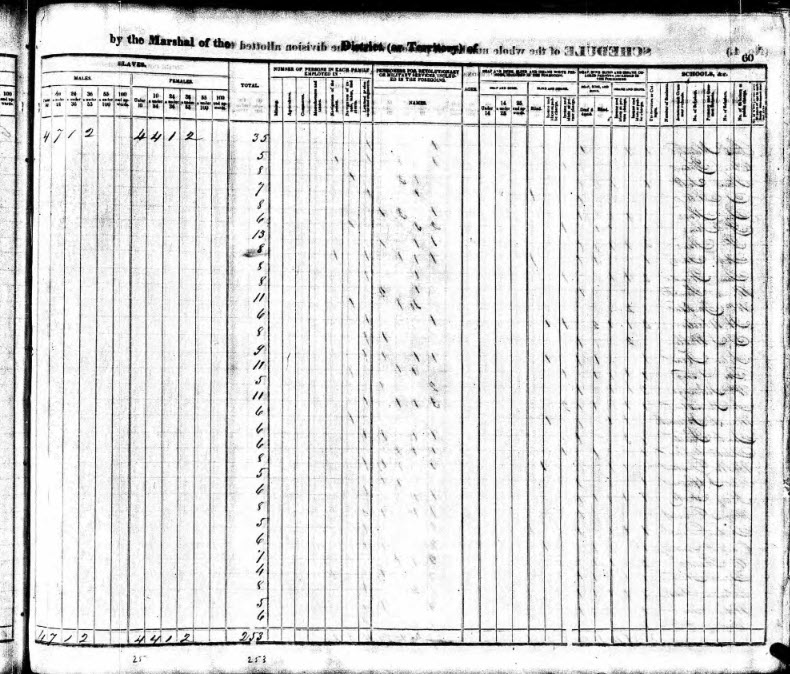 The 1840 census of Marion County, Alabama, presents a situation I had never seen before. I had visited that census in search of one Benjamin Foster. I found on him p. 59 (reverse), line 1, with a white family of 10 and 25 enslaved people assigned to his household. Curiously, in 1850, he is enumerated again in Marion County, at which time is property valuation was set at $300.

Hmhh. What happened in that decade to the Benjamin Foster family?

One explanation for a radical reduction in property between 1840 and 1850 might be the Panic of 1837. Particularly between 1840 and 1845, many American families went bankrupt. Suicides skyrocketed. Debts and lawsuits were rife. And that, of course, is a promising circumstance for us when working a county whose courthouse records are destroyed prior to 1885. For a man of his economic status, faced with lawsuits of such significance that they would consume almost everything he owned, there may well be legal notices in newspapers in Northwest Alabama's commercial centers. Or even the possibility of surviving court records in district court files.

But, then, that's not the only explanation. Among other things, those 25 enslaved people tallied for Benjamin's household might be assigned to him in the role of overseer for an absentee landowner.

• "Your 'Benj. Foster' entry appears on the top line of the page. No other household on that page of 30 or so families owned any slaves at all.

• Curiously, if we thumb back a page, we see the same situation. Only one person on that page owned slaves and he was also enumerated on the first line.

• In fact, if we check every page, we find the same. Some of the pages had no tallies at all in the columns headed "Slaves." But all of the other 19 pages present only one slaveholder per page and that person always lived in a position in his neighborhood that, curiously, put him on the first line of the page—if we take the census at face value.

• You’ll also note that rural, hilly, sparsely populated Marion County supposedly had some extremely wealthy slaveholders. Absalom Miller, for example, is said to be 20–30 years old with a female 15–20 and no other family member; yet he had 131 enslaved people. J. C. Alexander’s family had 141. The list goes on. Those are numbers that were uncommon even in Alabama’s “Black Belt.”

In short, when the census taker made his second copy for Washington bureaucrats who were interested that year in numbers of people and their age groups—not in the wealth of any specific person—he took another short cut. As he started each new page, on the side of the page that asked for slave data, he made a one-line entry at the top of the page on which he tallied the number of slaves in each age bracket held by all the people who were enumerated on that page on his original copy."

As a result, the household tallies that Ancestry provides for that census are badly skewed:
• If our ancestor is shown with 23 or 35 or 47 enslaved people, he may have owned none at all.
• If our ancestor is shown with none on that census, he may indeed have held others in slavery.
• If we are descended from Marion County's enslaved people and we use the 1840 census to identify the pool of men we need to study, we are totally misled.

So, when you gather census data, do you look for anomalies in your ancestor's data—or anomalies on the census—and then seek to explain them? It matters.