I have in my possession:

I'm struggling how to show the differences between the different routes by which the documentation has reached me in the relevant citations (and in some instances how to create the citation at all).

Problem 1: For documents ordered via the UK Government Online Probate Search Service, the digital copy is only made available for a limited time to a named individual, so citing the document as if it was still online for others would be misleading.  So I'd plan to cite these with the emphasis on the original, and then identify the website. For example (my father's Admon):

Or should it be:

(I can't find on the website an official name for it).

Problem 2:  How to cite the original grant of probate with annexed copy will for my mother (bound as a single document)? The authors of the two documents are different but do I need to cite an author for the will if I name whose will it was?

I have for the original:

And for the photo-copy will:

ColeValleyGirl, let me ask a

ColeValleyGirl, let me ask a more-basic question first. Are you aiming for a source list entry or a reference note? The fact that you are using internal periods suggest the former but, then, source list entries typically cite to the collection or series level rather than the individual document.

My software (Family Historian)  isn't very good at citations in reports, but cites a source for individual staments, so a reference note.

ColeValleyGirl, I’ll answer this in two parts—one part for each of your numbered problems. I’ll also paste in snippets and then respond to each.

Problem 1: For documents ordered via the UK Government Online Probate Search Service, the digital copy is only made available for a limited time to a named individual, so citing the document as if it was still online for others would be misleading.  So I'd plan to cite these with the emphasis on the original, and then identify the website.

That’s a good decision, given the limitation described in your first sentence. Citation-wise, the situation is equivalent to the archive mailing you a photocopy. You are thereafter citing the original, in standard format, with an identification of the archive that supplied the image copy.

Or should it be:

The emphasis on the collection and its creation, with identification of precise document being a smaller element in the string, would be the best approach (from the standpoint of data-entry) if you have numerous items to cite from this collection. If you lead with a citation to the exact document, then your corresponding source list entry would do the same; your source list would eventually be bloated beyond control with thousands of citations to original documents.

The approach we're suggesting below also takes into account the fact that a reference note (footnote, endnote) citation is written sentence-style with all the essential details contained in that one sentence. This is necessary because footnotes and endnotes often cite multiple sources in a paragraph format. If each part of each source carries a period after it, then there's no way to discern where one source ends and another starts. (Putting periods between elements in a citation is done only in source-list entries where each entry is a standalone item on list and multiple sourcs are not merged into a single "paragraph.")

Your "Problem 2" will be answered in the next message.

"You need both the full name of the deceased and the year they died to search for a will or grant. This matches the way information is stored in the archives."

However, in practice, up to 1996 they're indexed in the Probate Calendar Book (more fully known as The Calendar of the Grants of Probate and Letters of Administration made in the Probate Registries of the High Court of Justice in England) which is organised by the year probate was granted (not year of death) and then by surname and first names; the entry in the calendar also includes an address and date of death. So the name and the date of the document uniquely identify it. (Although I could quote the page number from the yeae's calendar, that would't be a page number for the document).

The archive and collection are harder to identify.  If you're applying by post for a copy, you ask for a search of the "Probate Records of England and Wales"; however, the full title of the calendar suggests "The Grants of Probate and Letters of Administration made in the Probate Registries of the High Court of Justice in England" and I think that better identifies the collection. A postal request is sent to one particular address, or you can go in person to any Probate Registry or Sub-registry, including the Principal Registry of the Family Division. So although the document originated at the District Probate Registry of Birmingham, a copy can be accessed via any registry or sub-registry (but the original 'Grant' will never be produced as it was given to the person administering the estate). In these circumstances, would identifying the archive as the 'Principal Probate Registry, London' make sense?

With this in mind, I'm now thinking:

For clarity, this is a

For clarity, this is a locally created record that has been moved to a central archive, so EE section 10.36 is relevant (loose papers).

In response to your second

In response to your second dilemma, which you describe as

Problem 2:  How to cite the original grant of probate with annexed copy will for my mother (bound as a single document)? The authors of the two documents are different but do I need to cite an author for the will if I name whose will it was?

I have for the original:

And for the photo-copy will:

The basic issues are the same as in Problem 1. The one noticeable difference is the fact that you apparently did not get this online; therefore, that extra citation layer is not needed.

Two essential elements are missing in all of the approaches above.

Would we be correct in assuming that this is a locally created record that has been moved to a central archive? If so, then the format to follow would be EE 10.36 [Probate] Records Removed to … Archives.

EE has three passages that are particularly relevant to this discussion. You may have already read them, but I'll mention them for the benefit of others.

The original Grant of Probate

The original Grant of Probate with annexed copy will is the Original probate document. The Principal Probate Registry (where this particular document was actually created) has a copy but I hold the original (given to me as Executor).

So perhaps for the original:

I've also determined by inspecting associated correspondence that what I thought was a copy of my mother's will is actually the original provided to me after her death by her solicitor, so:

You've done a superb job of thinking through the issues that affect both acccess and reliability. Your discussion should help many others who discover our conversation amid their own frustrations with this complicated set of circumstances. Your exchange has enlightened me, also. Thank you for sharing your final choices as to how these records might be cited, given the issues involved.

I might also add one thing more. Given that I have not had the opportunity to work personally in this particular set of records, it would be foolhardy for me (in the name of EE) to issue some "final judgment" on your citations or to offer an "official" EE model. At this point, you know this set of records better than I. My role, in cases like this, is only to ask questions or discuss principles—as a foundation for you and other researchers to build on as you analyze the quirky source or collection you are using.

Thanks for launching this discussion.

I know this thread goes back…

I know this thread goes back to 2016, but thought I would add to it.

It relates to image copies purchased at the same website.

As I have many documents (which are official transcripts, not the original will) from the same website, I have crafted a slightly different citation:

I think this explains:

1. that they are not original wills, but official transcriptions of the same.

2. the database "Find a will" provides the option to purchase (pay-for images) of the document

Thanks, RobynRon, for adding your insight.

I'm also struggling with this matter. I have read all the comments.

However, I'm struggling to understand the structure of the citation you created, so just something as simple as what "District Probate Registry at Birmingham (Warwickshire, England)" is? Is that where it is held? Sorry, silly question but I'm really finding this citation stuff difficult.

I am also using the same service and I've attached an image to show what I have so far. I have the "Will and Grant" as two separate documents provided by the service so this is what I'm trying to cite. 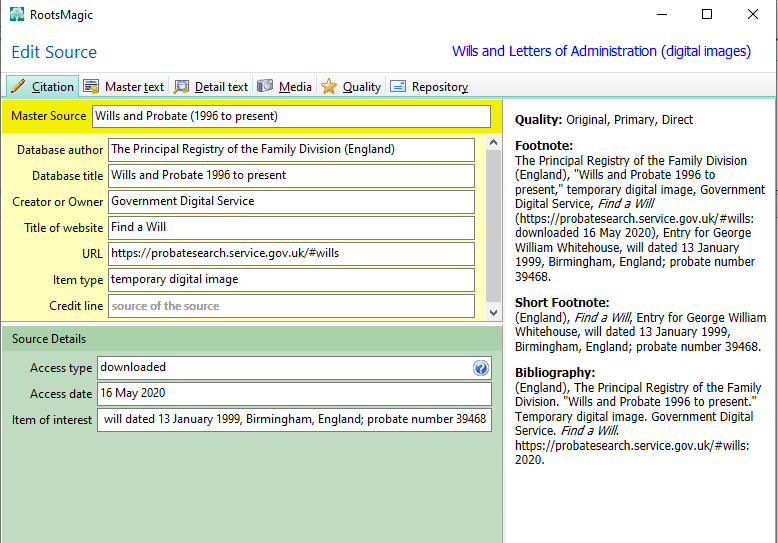