I have been crafting complex digital image citations for FHL preservation microfilms in the following manner:

My question is regarding the title of the microfilm in the first element of the citation. Titles are usually placed in italics or parentheses, depending on original source/usage. However, most of the examples I have seen in EE maintain FHL microfilm titles in standard font (some exceptions being titles of church records books, probably because they are published book titles rather than preservation microfilm titles). In fact, EE 2.68 (p. 81, second ed.) says "Italics should not be used for the titles of......preservation microfilm."

Nevertheless, the first element of my citation seems less clear than it might otherwise be if I used parentheses or italics. If I italicized the title of the preservation microfilm, it would be much easier to distinguish that title from the author and the more specific parts of the probate record book. For example:

I realize my argument is against an institutionally accepted practice. However, there is always room for improvement - in my own work, as well as in institutional practices. If someone could please explain why we would NOT want to make it easier for a reader to distinguish a title from and author or other information, I would sincerely appreciate it (and I'll sleep better at night for knowing). Also, I'm sure there are more problems with my citation than just what I am asking about the FHL film title. Please feel free to critique anything else you may see wrong with the formatting. The feedback will be very well received. Thanks everyone!

Hello, MMS: The purpose of…

The purpose of italics is not to distinguish a title from the author’s name. That distinction is made by the wording itself. The purpose of italics is to tell us whether a source is published and, if so, whether it is a standalone item (i.e., a book, journal, map) that would be found in libraries elsewhere or catalogs of published works such as the Library of Congress online catalog or Worldcat.org.   (See 2.22 “Citing Titles, Basic Rules.”)

The reason this instruction appears under “Basic Rules” is that it really, really is a foundational principle of source identification, across almost all fields of study.  Yes, people and institutions always have room for improvement. But not many people would attempt to overthrow a practice used as a communication mechanism by hundreds of millions of people worldwide.  If you or I attempted to do so, we would be one person against the world and the world would consider our work misleading or uninformed.

Also in the “Basics” category, you state: “Titles are usually placed in italics or parentheses, depending on original source/usage.”  We need to clarify that. Going back to EE 2.22, we see this: 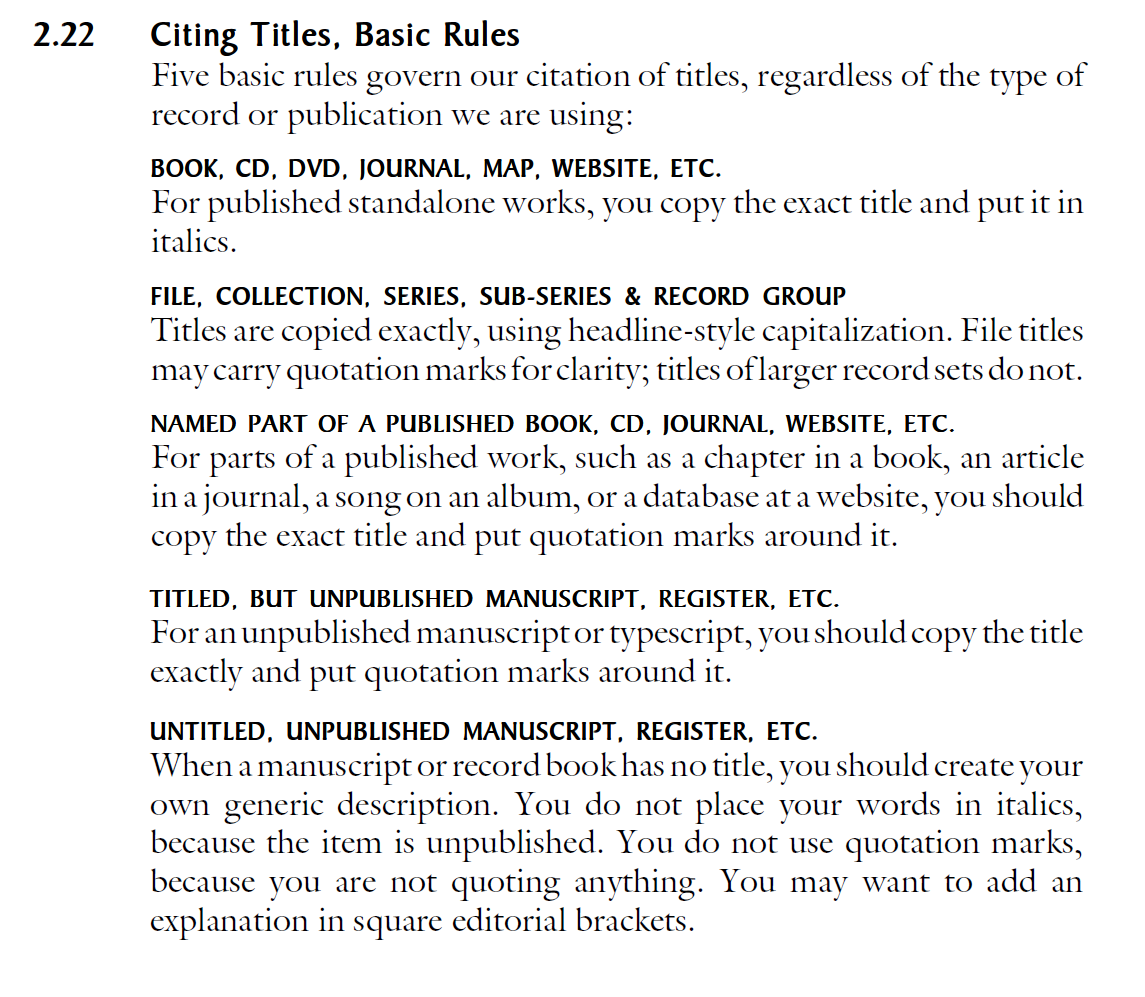 In short, we use

Parentheses are placed around publication data rather than titles.

You then state: “Most of the examples I have seen in EE maintain FHL microfilm titles in standard font (exceptions being titles of church records books, probably because they are published book titles …”

The major misunderstanding we need to clarify is this:  FHL microfilm has no title.  (EE2.27, para. 2)  One roll of film at FHL may contain many different items, even unrelated things on the same roll, each of which is individually titled in its native setting and described in usually different words by FHL cataloging. Often a roll contains several registers or record books that are part of a series.  The title we cite is the title that appear on the specific item that we are using.

That leads us now to a problem with the source you are using.  Your citation begins:

The image to which you point is a poor-quality image. Meanwhile, I live just a few miles from the Wilson County, Tennessee, courthouse. If this document were critical to my research, I’d drive over and pull the record book to get a clearly legible copy. If I did not live close, I’d likely contact the courthouse and ask for a copy of that will. In either case, if we sought the record book using the title as you give it, we'd get nowhere because the Wilson County courthouse does not have any such record book.

Typically, to identify the unpublished record book we are using, we would flip back to the imaged cover of that register. In this case, we have a register imaged by a film crew that did not image the title of the book. We do not know what the actual title is. We have no title we can cite.

When I analyze the wording of your citation, what I see is this:

As constructed, your citation seems to suggest this:

You definitely get bonus points for studying FHL’s catalog descriptions. That extra effort can help us understand what we are using. But catalog descriptions are not the same as the actual “titles” of the imaged material. (That's what EE 2.27, para. 2 cautions against.)

If, for this set of records, we begin by citing the record book, and then cite the database, we'd create a citation that begins like this:

That would not a helpful citation or a logical one.

Because your document is embedded in a named database at FamilySearch,  the logical citation would begin with  the identity of the database, then drill down to the untitled book and page. (That is the suggestion also made by FamilySearch at the ARK you cite.)  In this case, your reference note would not end by saying that FHL is “citing  FHL microfilm 4770360” because FHL is not citing that in the database that you are using. (And because the microfilm number is actually not 4770360.)

The simple way to cite this, using just one layer, is this:

That also shortens the citation. You will notice that the portion which cites the database is the same citation that FamilySearch suggests for that image (a citation FamilySearch based on its interpretation of Evidence Style). We cite the "Database," the Standalone Publication in Which the Database Appears (the place of publication : date), the Path > Waypoints > image number.  At the end of that citation to the database ... image, you add on the identity of the original book, page, and specific item.

Incidentally, I added the date of probate to the detail about the will. Otherwise, users of the citation would wonder why we are citing an 1843–48 probate book for an 1838 will and then question whether one or the other date was a typo on our part.

THAT was a GREAT response!…

THAT was a GREAT response! Thank you so much!

I’ve spent some time studying the very thorough response. I loved it! I think it addressed FamilySearch database citations perfectly. I also carefully re-read EE 2.24 – 2.37. In your explanation, I was very happy to see you picked up on and discussed search path differences of viewing the image through the FamilySearch database versus through the FamilySearch catalog. You then gave a marvelous description and rationale regarding database citations. As we both recognize that there are multiple ways to get to this particular image, I am wondering how the citation would differ if the other (FS catalog) method of access were used. For example:

As a side note, tt was interesting to find that when accessed in this manner, the citation provided by FamilySearch was exactly the same as if accessing it via the database method, AND they erroneously maintained the image number (14 of 242) from that method as opposed to the catalog method (225 of 661).

MMS, my apologies for not…

MMS, my apologies for not seeing your follow-up question.  You've handled the "alternate approach" very well.